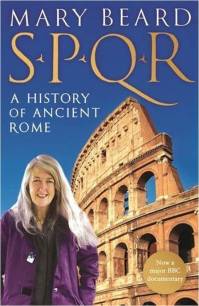 The enigma that is ancient Rome is one that helps to fuel our constant attraction. Although this huge swathe of history can be somewhat dizzying if outlined by the ill-disciplined and even intimidating if saturated with academically loaded terminology. Mary Beard, professor of Classics at Cambridge University, tackles this behemoth task with tact and vigour. Beard not only sheds light on the mysterious cultural origins of European civilisation, but also does so with a creative flare that entices the reader to continually delve into the disquisition surrounding the ancient Romans.

Beard seeks to, and ultimately delivers, a lucid treatise on the importance of Roman history and how it is directly relevant to issues within the contemporary age. In her prologue, Beard states that ‘after 2,000 years, it [Rome] continues to under-pin Western culture and politics, what we write and how we see the world, and our place in it.’ Despite the clear readability of a topic such as ancient Rome, Beard still maintains her academic discipline and ensures that SPQR: A History of Ancient Rome will never been seen merely as an entertaining read, but as a thoroughly researched and well-argued discourse concerning the politics, philosophy, culture and legacy of the Romans. In order to achieve this, Beard employs a number of sources to better facilitate the reader’s understanding. A variety of maps, pieces of art and archaeological finds are detailed alongside the written content of SPQR to successfully contextualise and add credibility to Beard’s argumentation.

Beard meticulously details the greatest events in Roman history in an ever more personal and grounded manner. During my read, I felt as though I became personally acquainted with some of the more important individuals; persons such as Cicero, Hannibal Barca, Gaius Julius Caesar and Nero. Whether these individuals were addressed as the saviours or enemies of Rome, Beard constructed their stories in a fashion that illustrates the colourful and thrilling aspects of their interactions with Rome.

When considering the sheer amount of relevant information to Beard’s area of study, we are confronted with a colossal quantity of details. Beard’s SPQR is a work restricted by the necessity of its own limitations. Beard does not seek to answer all the questions relevant to Ancient Rome and SPQR is by no means exhaustive. It is my belief that Mary Beard sought to fuel a hunger for a deeper understand of the ancient Roman world. This is certainly true with regards to my own experience as, after reading SPQR, I was left with an insatiable desire to scour the ‘further reading’ section for more. It is this aspect of Mary Beard’s writing that truly sets her apart from other ancient history authors. Her aim, be it to entertain or to inform, achieves both simultaneously due to a combination of her descriptive prose and unmistakable scholarship.

It is no secret that, when seeking to educate, one of the principle conditions needed for success is the interest of those who desire to be educated. This is what makes SPQR such an enjoyable and educational read; it captivates the imaginations of its readers and through the use of colourful examples and visual aids, ensures that these tales of the ancient world remain within the minds of its audience. SPQR is a truly momentous tome, deserving of the attention of both academics and laymen alike. Purchasing this book will seldom be something those interested in Ancient Rome will regret.